My friends are starting to show irritation every time I spout off about what’s going on in my terrarium. When I finally take a breath, they ask if I’ve blogged about it yet. No, I say. Lately, I haven’t seen anything in there. It’s odd. The springtail population almost completely died off shortly after two new additions to the tank. On that note, meet Spiro, one of the two new additions. 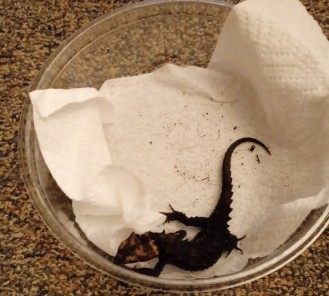 Spiro is a baby crocodile skink from the jungle underbrush of Papua New Guinea. He requires a humid but not overly hot environment with lots of soil to dig and burrow in. He loves munching on various types of worms, beetles, and crickets. Someday I’d like to see if he has an appetite for spiders, or if he has the ability to hunt flying insects like butterflies or moths. The second addition to the tank was a neon pothos plant – and it hasn’t grown an inch since I bought it. Very strange. Definitely not as cool as the lizard.

Springtails, Isopods, and Other Mysterious Creatures

I bought springtails (very small, white, rod-shaped insects) so they could maintain my terrarium by limiting mold growth and eating Spiro’s waste. I initially fed them raw mushrooms and carrot. The population was successful until I increased soil and air temperatures for Spiro. They didn’t like that.

Isopods are similar in function and vary in size according to species. I assume the ones I bought were cold-weather isopods because they seem to have mainly disappeared. Of course, some individuals were more tolerant of change than others.

Never look close at a terrarium. Even though I’m calling this one “lifeless” – up close it’s anything but. There are these small, clear soil worms and soil mites that must have come in on the pothos because I don’t recall ever putting them in there. Thousands of soil-dwelling creatures can look exactly alike to the human eye, so without a microscope it’s hard to decipher which species are present in the tank.

Ultimately, I decided that the insects I had were okay because there were no marks on Spiro, and they seemed only to be attracted to dead leftover food. Bugs only really become a problem in terrariums if they cause harm to your pet or if they start to show in large numbers. Most soil mites prefer to eat rotting things in the soil and that is great news for you. Sadly, if they like your plants, you can only hope: (1) that it’s not enough to kill it OR (2) that they out-compete themselves for food. Removing the plant and soaking it may help, but will probably kill the plant. You could also remove all plants and wait for the insects to die, but bugs are surprisingly resilient and can lie dormant for a while. Best let nature runs its course. 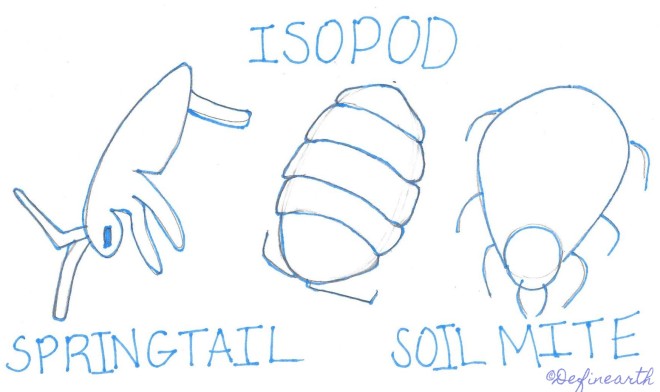 Other interesting discoveries included finding beetles that Spiro should have eaten still roaming the tank for WEEKS afterwards. Leftover food like crickets should never be left in a tank because they can eat your reptile’s skin or eyes and cause it a lot of stress. Beetles are much nicer but they could multiply in your tank, and dead ones will attract those soil mites I mentioned earlier. Try to keep your tank clean and put the food in a dish so it can’t run away and hide.

Spiro didn’t have a lot of soil in the pet store where I found him. His tank also wasn’t as cushy as the 20-gallon he lives in now. Of course, the pet store was only meant to be his temporary home. Now, he likes to dig pits in certain areas of the tank and I wonder: Is it to dull his sharp claws? Or is he hoping to uncover a tasty beetle or worm?

Spiro’s home is under a rock in a corner of the terrarium. He likes it much more than the log hide. Like a salamander, he digs a little burrow and hides in there most days. Leaves that he rearranged around his rock are like paintings that you might pick out for your house. He likes to bathe in the *dechlorinated* water dish when no one is around because crocodile skinks are insanely shy by nature.

A lot of effort has gone into preparing Spiro’s setup, and I rarely get to see him because he is a truly timid reptile. Despite his species status, many reptiles are undergoing pressure from deforestation. Populations which were previously stable could easily flip sides. I recommend getting a gecko if you’re into reptiles – just make sure you know adequate care. And don’t trust the pet store! Always go online and do your research.

Do you love reptiles as much as I do? Comment below. Cheers, Jess 🙂