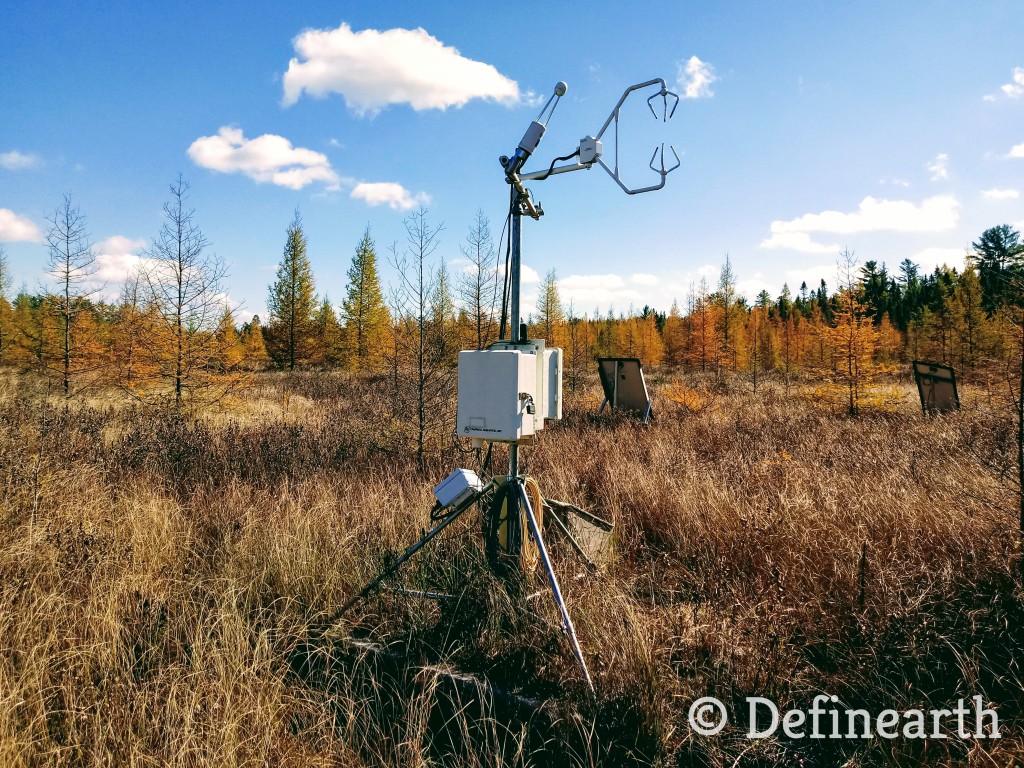 Despite the fact that wetlands have a relatively colorless appearance and are somewhat of an inhospitable environment for many species, these kinds of ecosystems are clandestinely buzzing with land-atmosphere interactions. Just last month, I explored Allequash Creek Wetland in Northern Wisconsin with the USGS to collect aquatic chemistry and CH4/CO2 measurements and to gain a general sense of the site. The eddy covariance flux tower in the photo above provides the flux data from the wetland which I will be compiling, analyzing, and presenting for my master’s thesis.

Wetlands are often praised in literature for their carbon sequestration abilities. According to Bridgham et al., (2006), peatlands in the coterminous US have an average carbon accumulation rate of  0.71 metric tons of carbon per hectare per year (or .29 tons per acre per year). A quick calculation for the Lost Creek wetland about 45 minutes from Allequash shows a net carbon flux of 2.20462 tons of carbon/hectare/year (or 0.892 tons per acre per year) which is more than double the estimate in Bridgham 2006. To put this in perspective, the average vehicle produces around 1.28 tons of carbon each year, as written by the EPA. Just under 1.5 acres of wetland at Lost Creek could offset the emissions from one car each year*. On the downside, methane emissions (CH4) must be considered as well. Rising water tables imply lower CO2 fluxes and higher CH4 emissions from wetlands. Methane has a lower molar mass than CO2, shorter residence time, and higher reactivity, yet more CH4 is released from wetlands than CO2.

Wetlands are located throughout the world. Botswana, Myanmar, and Florida are just a few places that possess these truly majestic ecosystems. Canada and Russia contain the largest peatlands. Alaska and the Northern US contain some very well studied wetlands too, but I was amazed at this one just 3 and a half hours from my new home. In the picture above I’m standing on a knoll of aquatic sedge so I don’t sink down into the peat. On average, Canadian peatlands extend to a depth of 2.2 meters. C-14 dating shows wetlands started to form after the last glaciation about 9,000 years ago. Peat continues to form at a rate of 0.53 mm/yr in peatlands as stated in this article in the journal of Ecological Applications.

Because of flooding, nutrient-poor soil, and anaerobic conditions, bogs support a narrower range of species than you might see in a rainforest perhaps. At Allequash, we spotted a Blue Jay, a crawfish, and a snapping turtle nest. A fox also happened to cross the road in front of the SUV on the way up. The evergreen on the left of the photo above was felled by a beaver. Their destructive habit aids in the protection of wetlands. Each time they remove a tree, they prevent the forestation and eventual drying up of these shallow pools. Dams reduce stream flows and create the sitting water landscape you see here.

Do you notice the organic color of the water? Iron has caused the water here to look like a giant cup of tea. I took field measurements of CH4 and CO2 at this spot using an open chamber. The chamber has foam around the edges to allow it to float on the water’s surface. Two tubes go from inside the chamber to a field measuring device, where CH4 and CO2 are measured. Data is sent in real time to an ipad and then measurements are manually recorded each minute in order to calculate rate of change. Dissolved Organic Carbon (DOC) and Dissolved Organic Matter (DOM) samples were also taken. These provide information on leaching from trees and detritus into the water, and more.

Time for the burning question: What is my thesis? An answer is coming, I promise! Flux information is relayed from the tower every half hour. Imagine how much data we have on solar radiation, temperature, carbon, methane, evapotranspiration, heat, and vapor pressure difference! This isn’t the only wetland we have access to, either. I also plan to investigate land management, water rights law, and conservation to get a thorough picture of how we impact places such as Allequash and how they indirectly impact us. Do you live near a wetland? Let me know!

*This indicates I had to do this multiplication twice. Be sure to divide by (44/12) when converting carbon dioxide quantities to carbon!