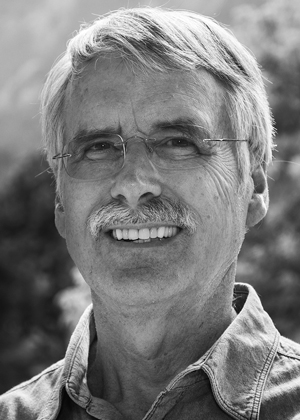 Kevin Trenberth is a research meteorologist and senior scientist at the National Center for Atmospheric Research in Boulder, Colorado who works largely on analysis of global climate data, climate models and the effects of El Niño. Upon meeting Dr. Trenberth, I found him to be well-spoken with a down-to-earth yet amiable disposition. If you listen closely you can even hear his subtle sense of humor. During his time at UW-Madison he shared insights on modeling, working with others, and a broad overview of energy in the climate system.

Everyday culprits of energy use include indoor heating and cooling, transportation via plane or car, even charging devices like cell phones and laptops. In your opinion, is there a way to cut down on consumption without sacrificing quality of life?

I am often appalled at the overheating and overcooling that occurs in buildings in the U.S. It is often hotter inside in the winter than it is in summer, especially in the South. Air conditioning is turned up too high and in winter the temperature is too high. I grew up in New Zealand without central heating or any A/C. In winter we wear sweaters. In summer we take them off. For sleeping I like cool conditions and in our house the thermostat is set for 64° at night, and 68° by day. In summer we cool to 75° – it is OK to sweat a little.

I strongly support the use of alternative transportation- especially bicycles. Now electric bicycles and scooters are growing in use but the roads are set up for cars and many car drivers are hostile to bikes. In Boulder we have many bike paths. Riding a bike and walking is actually a form of exercise and helps keep the body healthy. Some lifestyle changes are not only desirable but beneficial.

I have solar panels on the roof of my house, but anyone can use solar power by using a clothesline to dry clothes. A dryer is actually a big user of energy and is wasteful. It is less convenient perhaps; especially if a rain shower ventures by, and some neighbors complain about undies on display, but undies on a clothesline (and other objects) are environmentally beautiful.

I take the bus to and from the airport, and I drive a small fuel efficient car (with stop-and go features so the engine turns off at traffic lights etc.), but in Boulder all-wheel drive proves essential at certain times of the year. And, of course, we should insulate the walls and ceilings of our houses, and have a fuel efficient (97% or better) furnace. Some of these things require capital up front, but they pay off in time and often there have been tax rebates to take advantage of. Most importantly, vote for politicians who support such incentives and renewable energy. The neat thing about all of these things is that they end up saving money. This is especially true for businesses.

The frequency of severe storms such as Hurricanes Florence and Michael has made climate change a devastating reality for many. What does the future look like in terms of climate? How does El Niño tie in to that?

El Niño determines the weather patterns: where the droughts are preferred, where the jet stream goes and where the storm tracks lie. There is always natural variability going on, of which El Niño and La Niña are but a part. But climate change means all weather events occur in a warmer and often moister environment. The risk of stronger, bigger and longer lasting storms will likely continue to increase, and we are seeing this already.  The changes go pretty much with Clausius Clapeyron: a 7% increase per degree C increase in temperature (4% per degree F) for moisture and precipitation, but those numbers can be doubled or tripled in certain storms such as hurricanes. Where there is direct feedback on intensity, size and duration.

You grew up in Christchurch, New Zealand; attended the University of Canterbury for your B. Sc Hons and have since been inducted to the Meteorological Society of New Zealand. Does your background as someone who grew up on an island give you a different perspective on things like renewable energy and environmental conservation when studying climate change?

See above for the differences in central heating and A/C. You can experience this also in the U.K. But the other thing growing up in NZ did was to make it abundantly clear that we are part of the planet Earth, and all the atmosphere is global: a global commons. We have to look after it a lot better.

Thanks a bunch to Dr. Trenberth for his cooperation on this interview. If you would like to read more, Trenberth’s Definition of El Niño is available for reading online as well as NPR’s podcast, “Link Between Extreme Weather And Climate Change” featuring Kevin Trenberth. More papers by Dr. Trenberth are available on Google scholar as well.